SOMA At the Railroad Park

April 7, marked the "maiden voyage" for model trains to carry passengers by the Elvin Sinfield Butterfly Garden down at the Medford Railroader's Park​ (Medford Railroad Park website). The new butterfly garden was dedicated by the Railroaders to Mr. Sinfield , who has been the caretaker at the park for years now. This pollinator garden is one of the many beautifully landscaped areas that train passengers can experience down at the park (see photos). SOMA is proud to have participated with the planting and the dedication ceremony.

​And get this: one of the railroad guys invented a new name for a new structure. The "Polleminium", short for a Pollinator Condominium! If you come and visit you will see a bizarre 18-foot pole and wire creation housing: a bee hive, trumpet flower vines climbing up cables for humming birds, a bat house, birdhouses attached at precarious angles, an orchard mason bee hive, all kinds of pollinator plants at the base. Oh, and don't even ASK me about the big osprey nest at the top: these guys are a bit on the wild side.

Thanks Railroaders. Us Monarch Advocates are proud to cross the tracks with you! Keep your eyes on the milkweed! 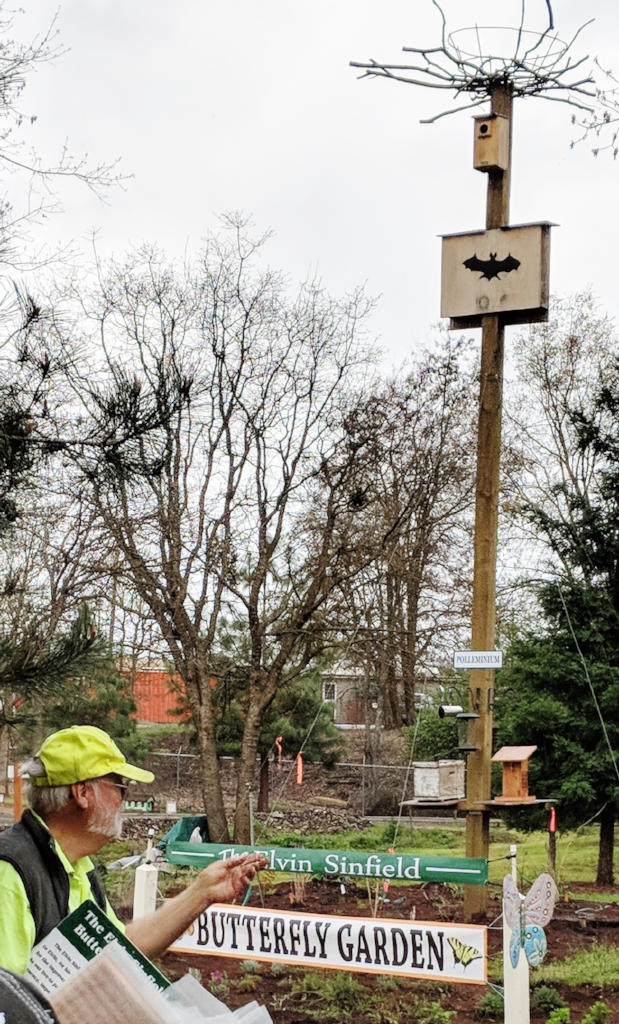 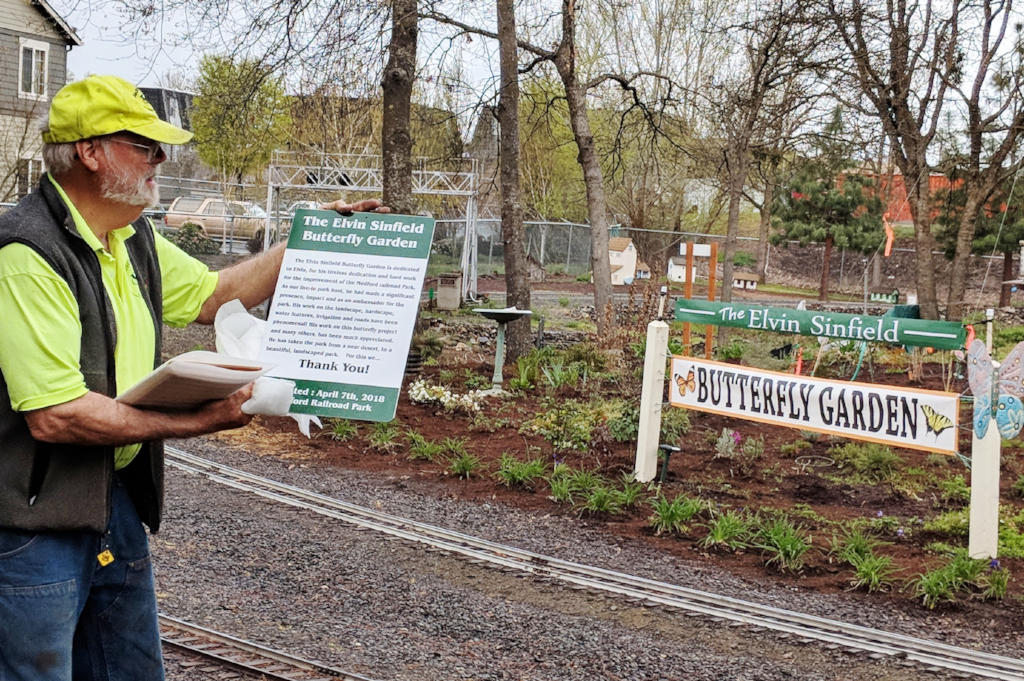 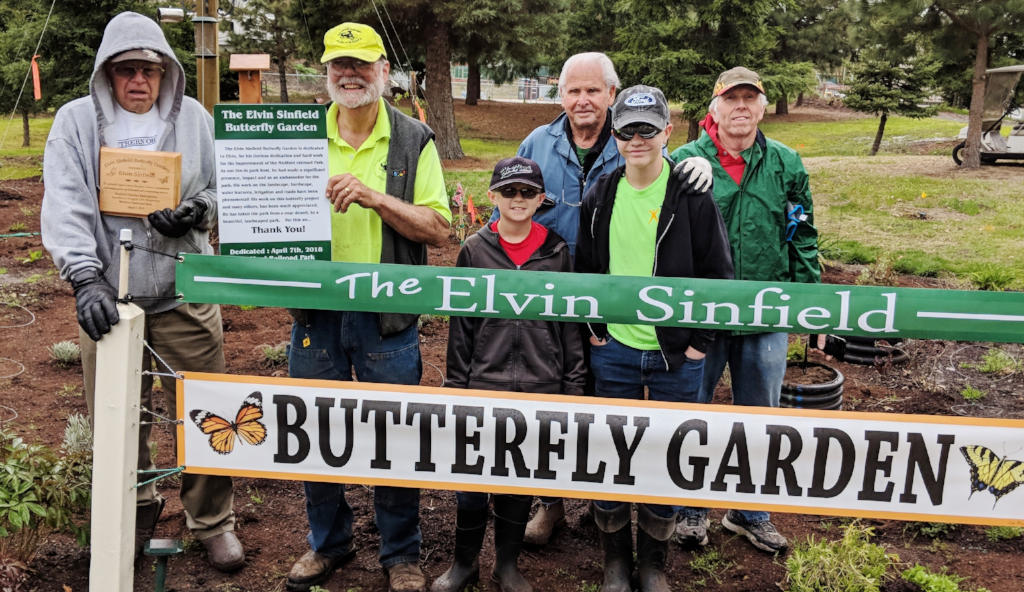 Robert Coffan and Suzie Savoie visit Jefferson Public Radio to talk about the work to help the Western Monarch. Monarch expert Dr. David James joins in on the conversation from Washington State University. Follow the link to JPR to hear the conversation. Click Here!

Western Monarchs: on the rise or decline? What do you think? 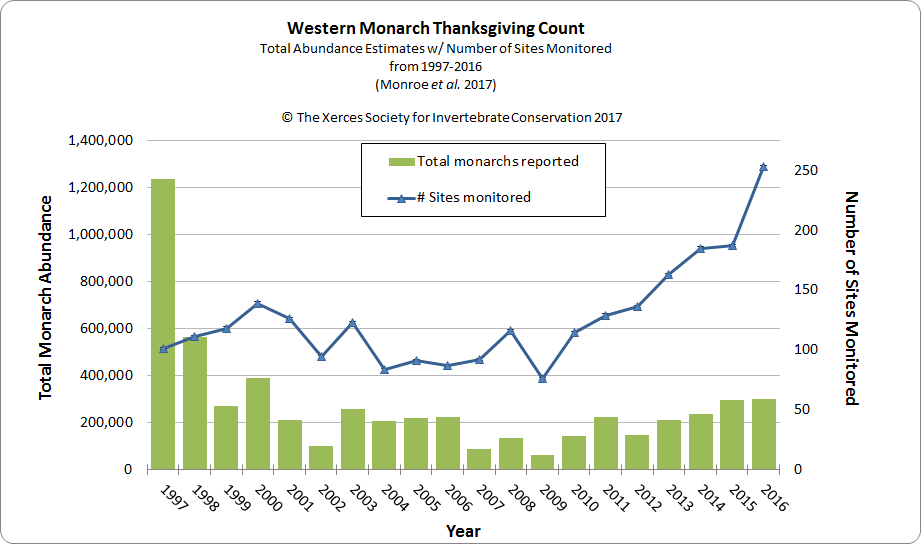 Big Monarch News! The results of the Western Monarch Thanksgiving count​ by Xerces are in. Here's the link to a one-page summary and a graph of the results... xerces.org

​When I first looked at the graph, and I saw that our slow and steady INCREASE in counts for the last 8 years since 2009 continued into 2016. "Yay!", I thought... for about 3 seconds. Then I noticed the blue line that is also shown on the graph showing "Number of Sites" monitored, and saw how the number of sites monitored has more than tripled over that time frame. ​So, that begs the question, "Are we finding more monarchs overwintering because we are looking harder?". Then, I FINALLY read the first paragraph in the summary and saw what Xerces and other experts think about that very question. What do you think?

The Western Monarch Thanksgiving Count marked its 20th anniversary this year. Begun in 1997, the count has become one of the longest-running and most significant insect citizen science projects in the U.S. This year, over 100 volunteers monitored a record 253 sites, the single greatest effort since the count began. They (like so many of you!) are amazing volunteers dedicating their enthusiasm and hard work to understand and help the remarkable monarch.

Robert, one of the Southern Oregon Monarch Advocates

MEDFORD, Ore. -- Monarch butterflies are migrating to our area and the staff at Coyote Trails spotted one this week. Robert Coffan, a Southern Oregon Monarch Advocate, spent the afternoon looking for monarchs to tag. “To me it’s like they’re carrying a little backpack and I always wondered, can they really migrate? I mean, this tag looks small, but for a Monarch butterfly, it weighs half of a paperclip. That could be pretty heavy,” says Coffan. Coffan found a Monarch caterpillar while searching for butterflies Tuesday afternoon. “You raise them from caterpillar and when you watch them come out of their chrysalis and they spread their wings for the first time… they just pop, they’re just gorgeous, and it’s a lot of fun to release them," says Coffan. - See more at: KRVD.com

SOMA Partners with the U.S. Fish and Wildlife Service
Click the following LINK to see the article that was featured on the U.S. Fish and Wildlife Pacific Region website (September 2015) – that took a look at the exciting student projects which rapidly ensued when the USFWS graciously contributed to SOMA’s efforts with their Connecting People With Nature (CPWN) grant. Thank you USFWS! 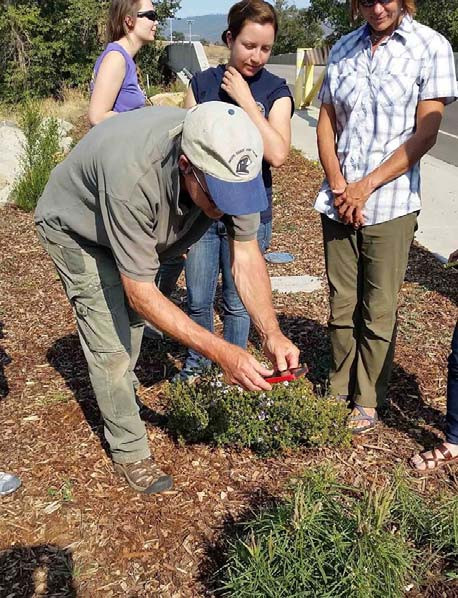 The following story and photos were contributed by Dr. David James of Washington State University, and features a monarch tagged and released by our own Southern Oregon Monarch Advocates, Robert and Simone Coffan...

“Tag recovery #2 was made at an overwintering site in a residential area of Bolinas, California, just north of San Francisco. A2045 has a very interesting story attached. This Monarch was one of the first two caterpillars found at the newly established (June 2015) Monarch Waystation at the Coyote Trails Nature Center (CTNC) in Medford, Oregon. In early September a group of agency people (BLM, USFW, USFS) met at the center with Southern Oregon Monarch Advocate people to look at the young Waystation and found a fat caterpillar that was the future Mr A2045! One of the photos here shows Joe Engler, Regional Refuge Biologist and Pollinator Conservation Coordinator for the US Fish and Wildlife Service, Portland taking a photograph of the immature A2045 that would soon become an important data point in our study of Monarch migration in the PNW! A2045 emerged on September 26 and was tagged and released at the CTNC by Robert and Simone Coffan, to whom we are grateful for providing the information on the young migrant! Ultimately, Mr A2045 flew about 312 miles south to spend the winter with about 10,000 other Monarchs at this overwintering site."

This inspiring story highlights how SOMA’s efforts are achieving big results, and more information and stories on SOMA’s incredible tagged monarchs can be found on SOMA’s Facebook page https://www.facebook.com/somonarchs. 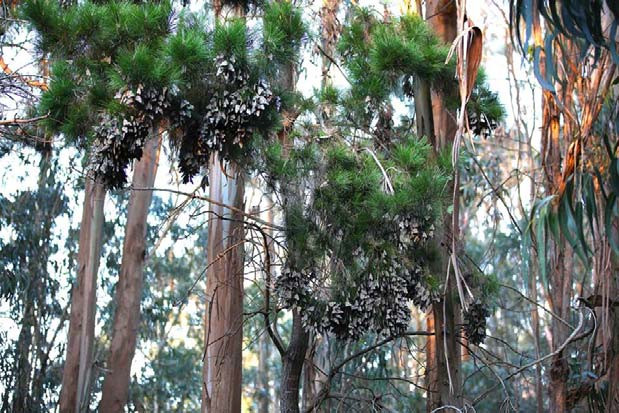 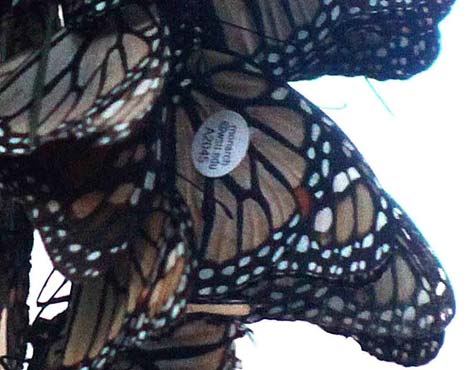 Special thanks goes out to Linda Kappen for being the continued Southern Oregon lead on the Washington State University tagging program and all the other SOMA members tagging efforts.

Take a peek at this upcoming October event in Medford, where the Southern Oregon Monarch Advocates will host a very youth friendly booth all about monarchs and monarch habitat at Kids and Creeks 2015.

Back in 2015, Southern Oregon Monarch Advocates Suzie Savoie, Linda Kappen, and Tom Landis talked with Geoffrey Riley of the Jefferson Exchange. This fun and lively interview covered things like the plight of Western monarchs, the importance of habitat restoration, the important work of SOMA, and what people can do to get involved and help monarchs! Listen by clicking on the following link: http://ijpr.org/post/making-rest-stops-butterflies#stream/0

Thank you Suzie, Linda, and Tom – and thank you JPR! 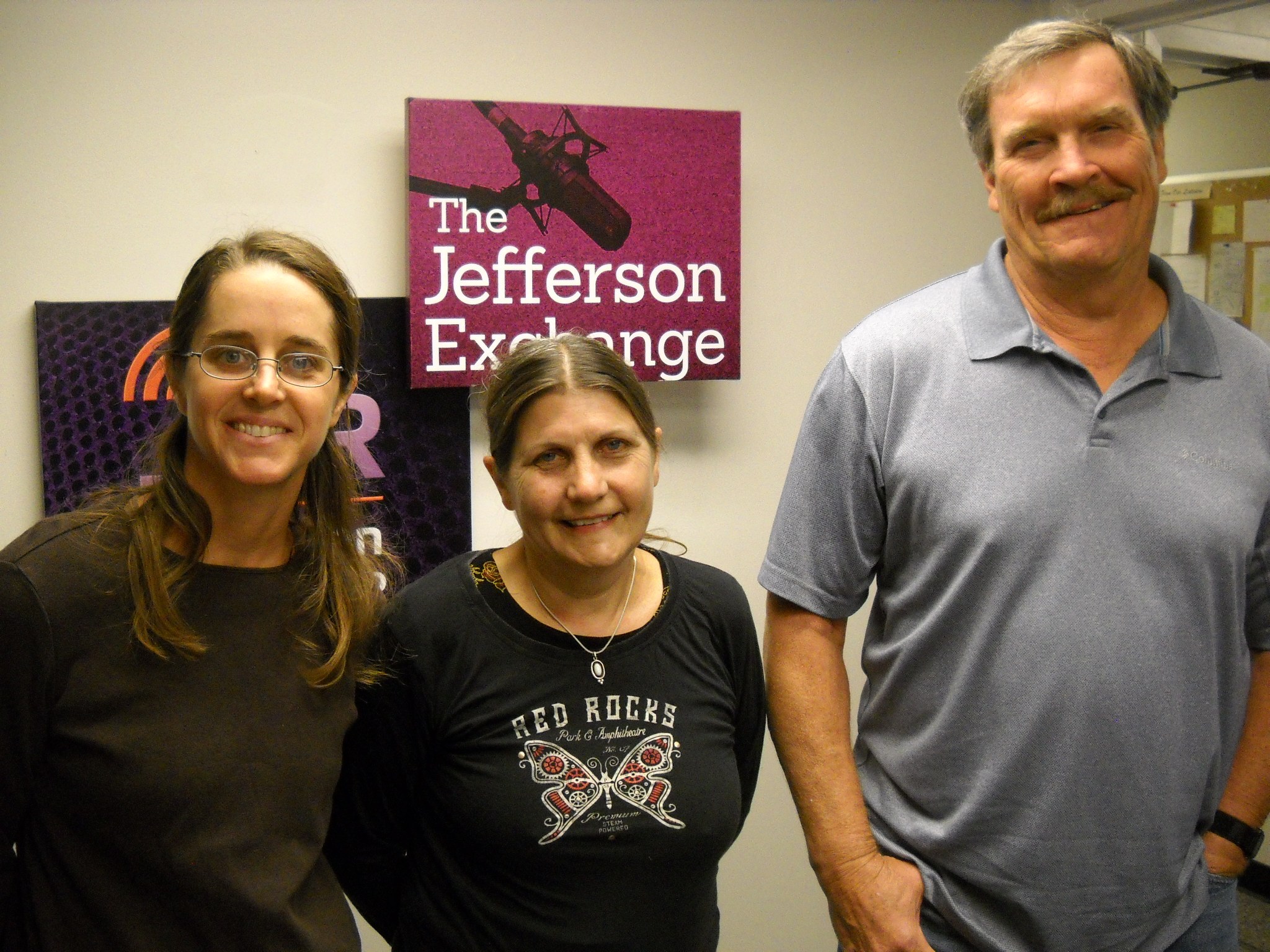 Take a look at the update to the Coyote Trails waystation. 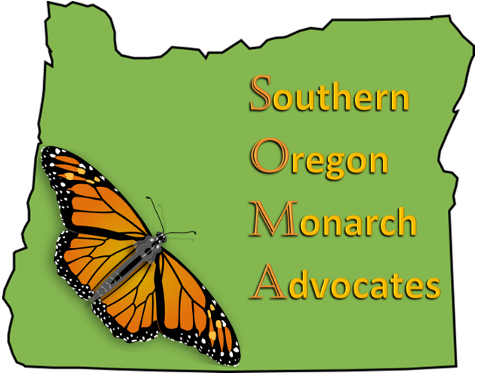 Click Here to take a look at a new waystation from SOMA and other local partners.

Click Here to take a look at artwork from SOMA and get a chance to post your own Monarch artwork.

Click to view an interesting article published on the Monarch Joint Venture website about tropical milkweed and parasitic infestation involving the Monarch Butterfly.